The promotional video of "Sino-German CPR Summit" has been viewed by over 30,000 people, liked by 4,438 people and forwarded by 918 people. 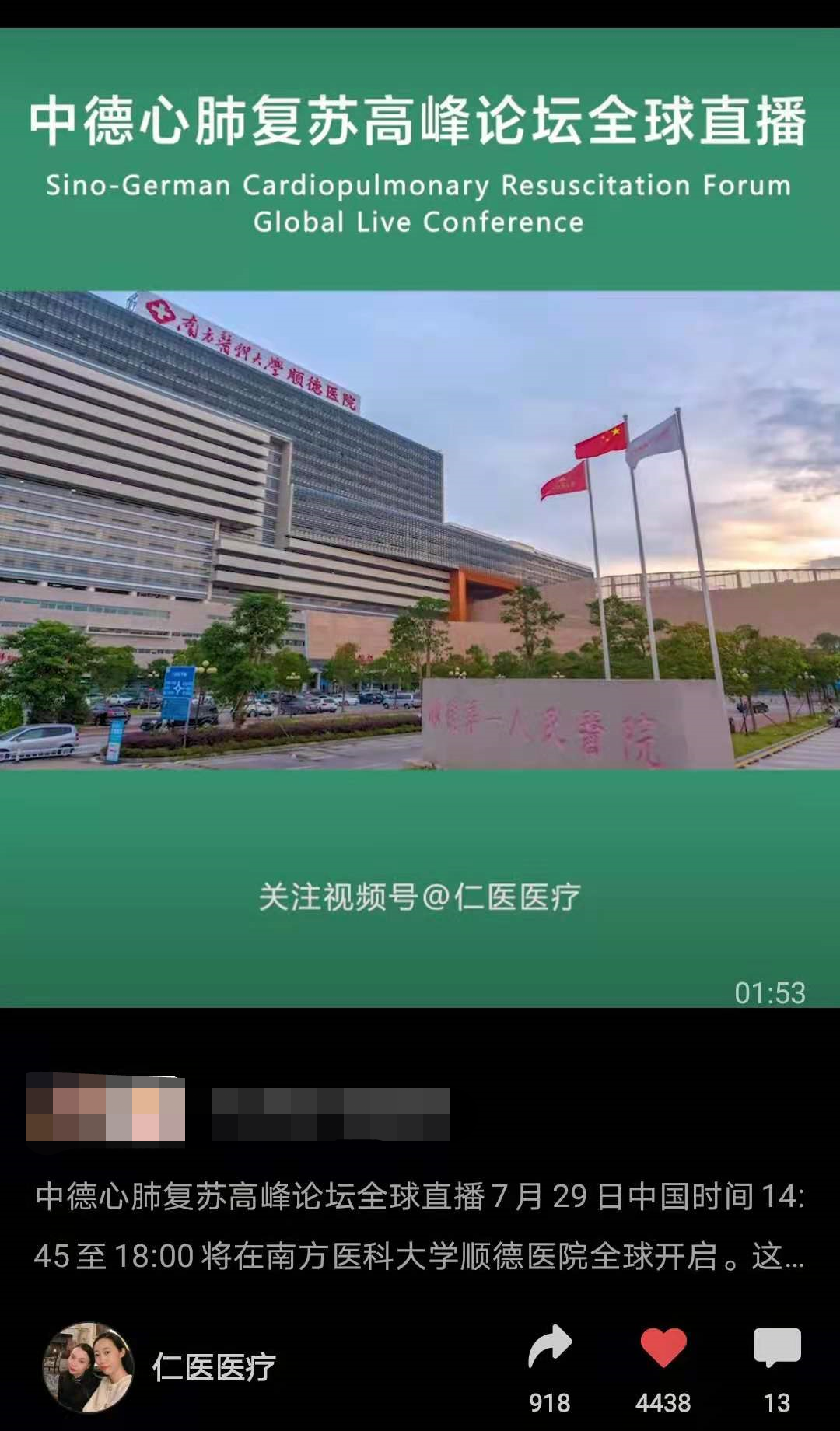 Shen Jie, Medical Director of Shunde Hospital of Southern Medical University delivered a speech for the opening ceremony of the forum. "Cardiac arrest is the leading cause of sudden death due to nontraumatic cardiac causes, which is a serious threat to human life, and the success of cardiopulmonary cerebral resuscitation and the seamless connection of the survival chain are crucial." 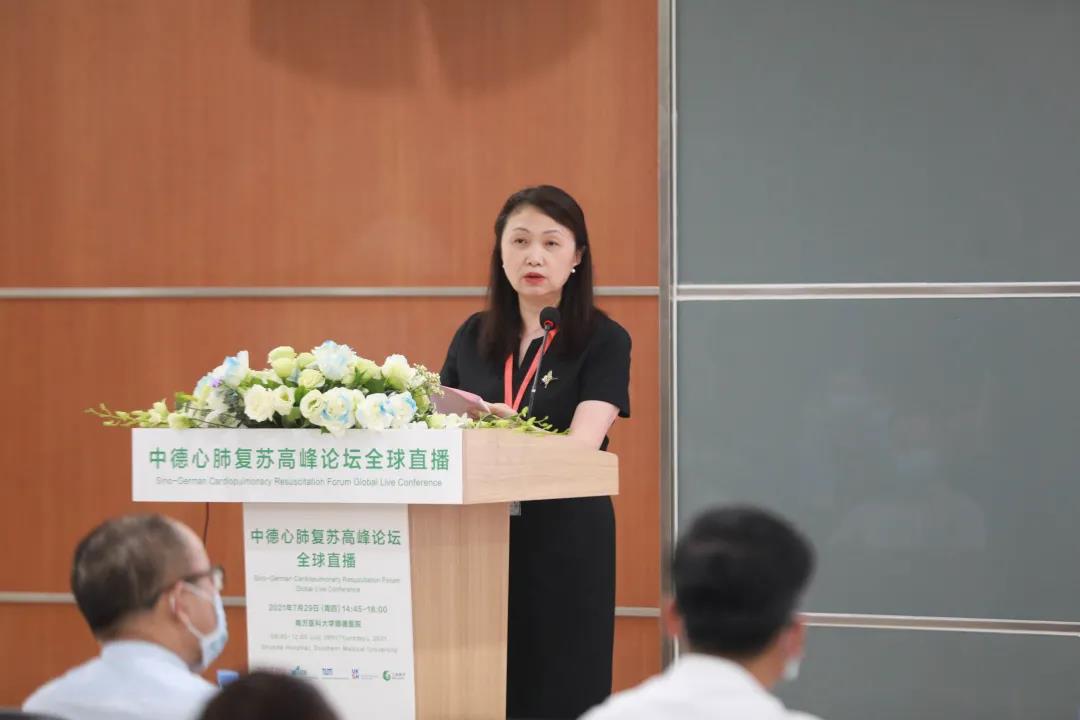 Director Shen said that since 2017, the Department of Critical Care Medicine of Shunde Hospital of Southern Medical University has organized hospitals in towns and streets to establish ECPR (extracorporeal cardiopulmonary resuscitation) rescue and treatment system. After years of development, the ECPR treatment system has gradually matured and become the first batch of national training bases for extracorporeal life support of the Chinese Medical Association. Combining the advantages of the hospital's Chest Pain Center, Stroke Center, Trauma Center and other medical treatment platforms, and working closely with medical institutions in that region, the treatment rate and survival rate of cardiac arrest patients are remarkable. The treatment rate and survival rate of cardiac arrest patients in that region have been significantly improved, and thus achieving positive social benefits.

With the strong support of Shunde District Government, Shunde Hospital of Southern Medical University officially established the "Resuscitation Center of Shunde Hospital of Southern Medical University". And the aim of this center is to respond to the advocacy of the Emergency Medicine Branch of the Chinese Medical Association, to take the lead in establishing and promoting the construction of a resuscitation center in China, to integrate the existing medical resources of the hospital, to fully optimize the treatment process, and to improve the level of CPR in this hospital by the most. Second, through the efficient operation of the resuscitation center after its establishment, the hospital hopes to further strengthen training and cooperation with neighboring hospitals, and with the ECMO transfer technology, they are hoping to build a regional ECPR treatment system for cardiac arrest and promote the pace of construction of regional resuscitation consortium, so as to jointly promote the high quality development of critical illness and cardiopulmonary resuscitation technology level in that region, and to gather the strength of the whole region to build the last strong protection system for Shunde people's lives. 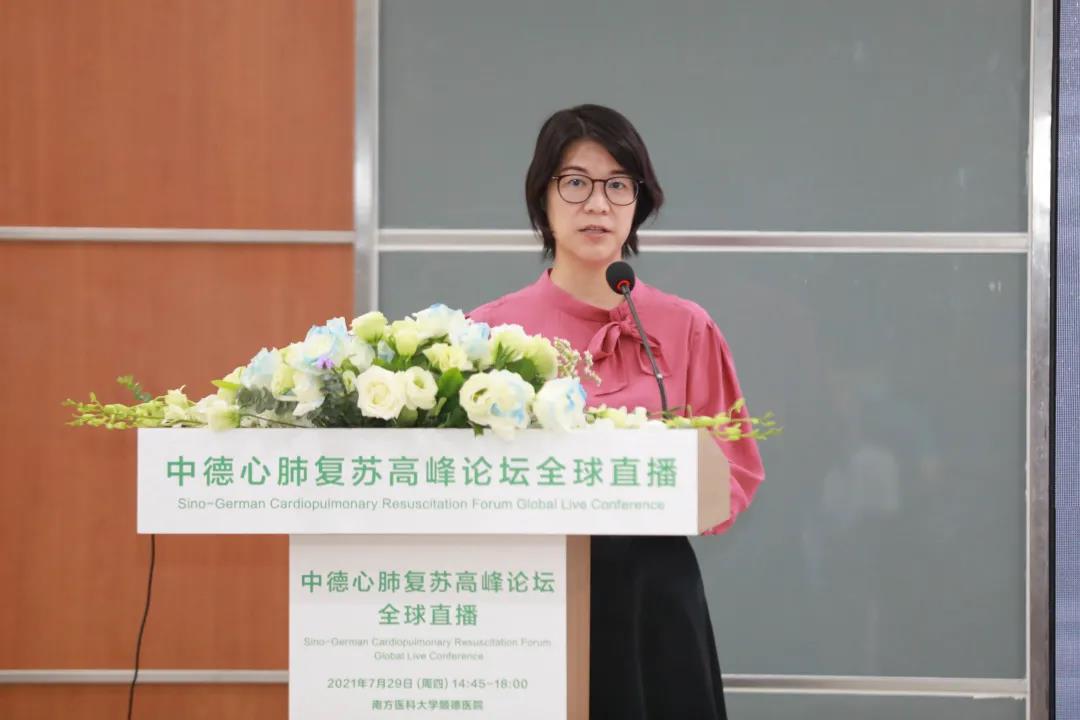 "Within this year, Shunde will complete the construction of the Chest Pain Consortium, the Stroke Consortium and the Resuscitation Consortium to jointly promote the high-quality development of the level of critical care and cardiopulmonary resuscitation technology in Shunde District." Zhao said. In addition, it is necessary to further enhance the Shunde public emergency rescue skills to ensure timely and correct self-aid and mutual rescue in case of accidents, to save lives to the maximum, according to her speech. 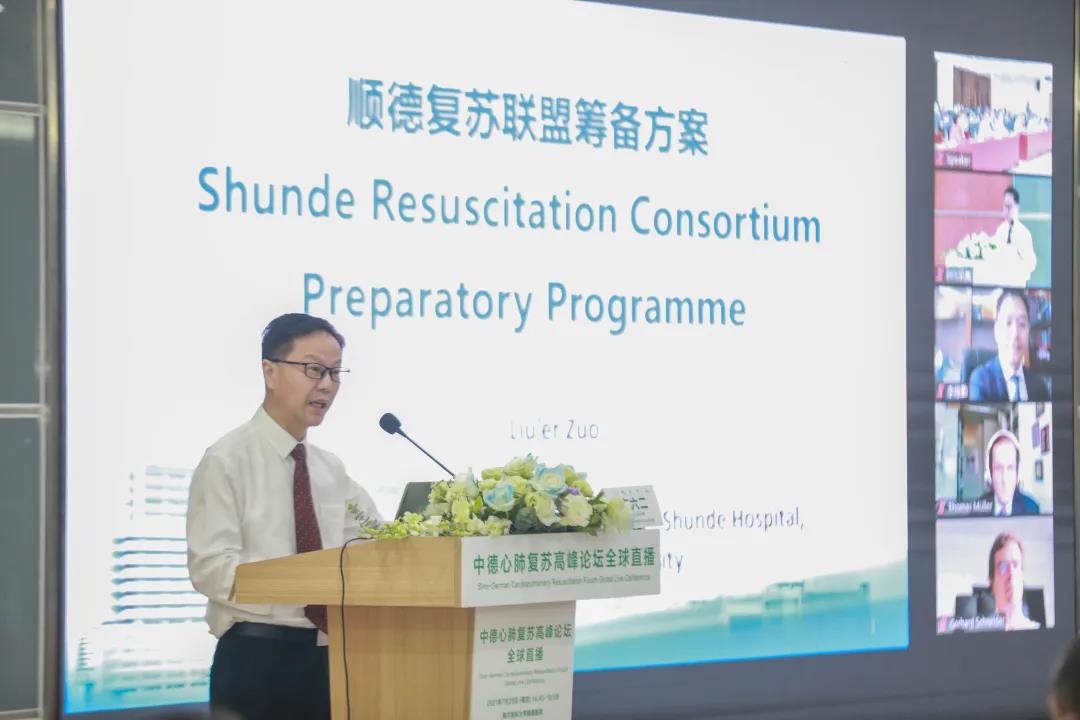 Prof. Müller, Head of Intensive Care Department of Internal Medicine II, University Hospital Regensburg, presented the effectiveness of ECMO for ECPR, the latest research on ECPR, the main issues and management measures for the clinical use of VA-ECMO, and interpreted the ECPR guidelines for 2021. 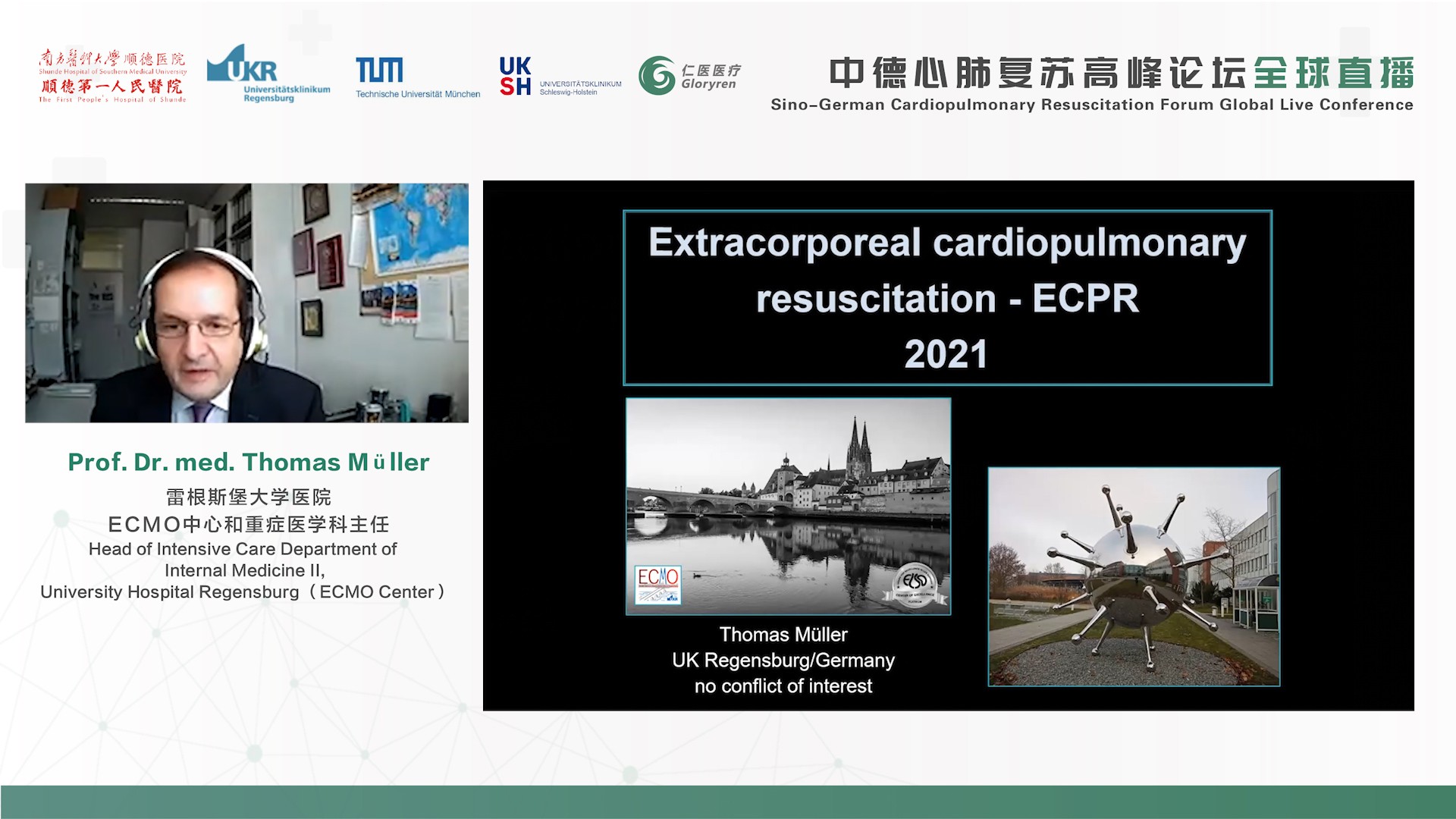 Prof. Müller is presenting his lecture

Professor Zuo Liu'er of Shunde Hospital of Southern Medical University made a relevant summary of the construction of a regional extracorporeal cardiopulmonary resuscitation system by combining foreign practice and the experience of ECPR in the region. He outlined how the construction of a resuscitation consortium was promoted after the establishment of a resuscitation center at Shunde Hospital of Southern Medical University. Professor Zuo concluded that the construction of ECPR system improves patient prognosis. Different regions should choose a suitable model according to the local situation, and continuously improve and enhance it to benefit more people. Prof. Schneider from Klinik für Anästhesiologie und Intensivmedizin discussed new developments in cerebral resuscitation and shares his experience of cerebral resuscitation in the German region. He detailed the monitoring and control of airway ventilation, hemodynamics, glucose, nutrition, temperature and other important indicators in the ICU for patients undergoing severe CPR. 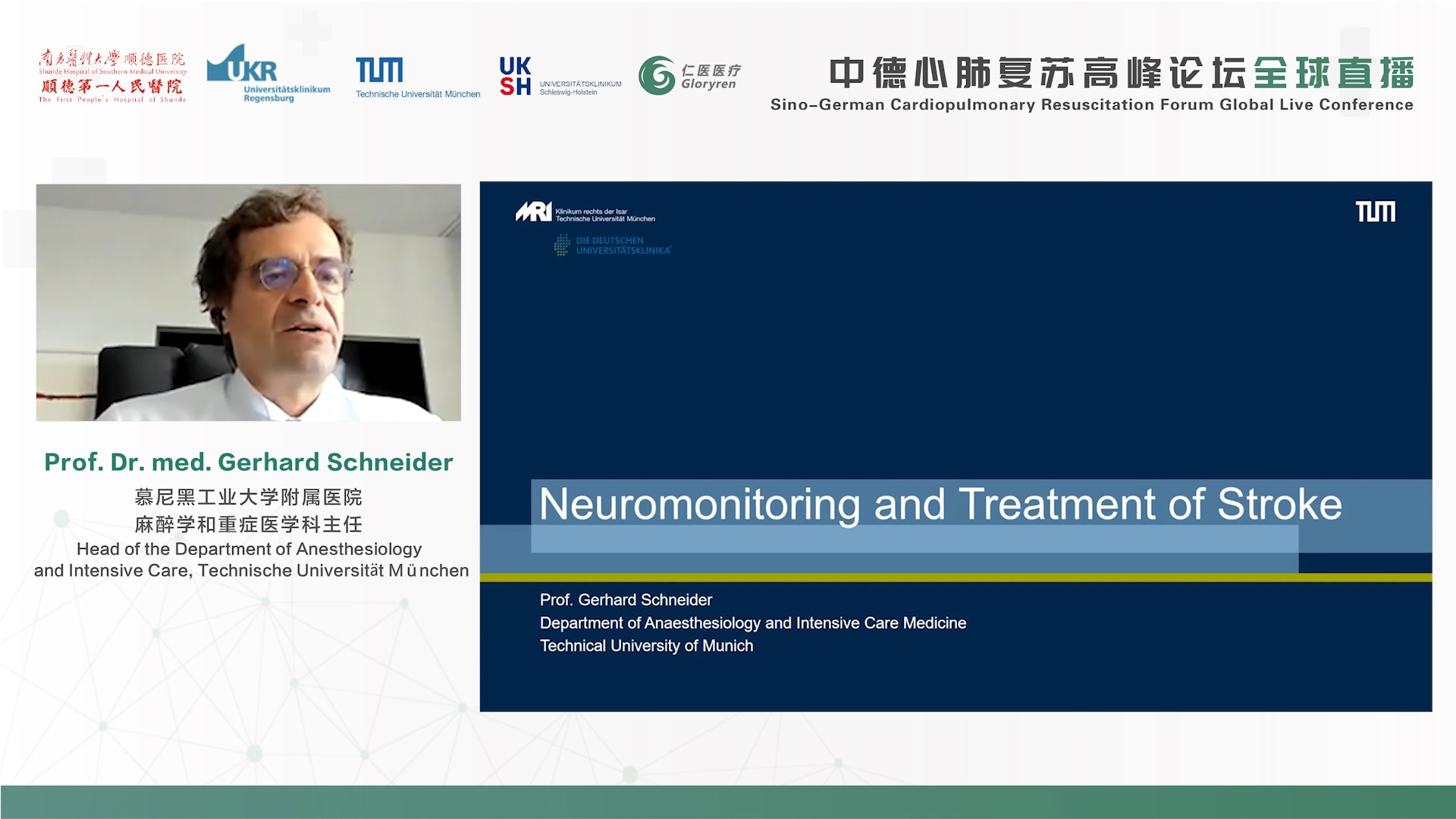 Professor Shi Xiangqun from Shunde Hospital of Southern Medical University talked about brain protection after cardiac arrest. Professor Shi said that brain injury is the main cause of death and disability in cardiac arrest patients, and brain protection measures after resuscitation have been a hot topic of research, with the goal of improving the survival rate and quality of survival of cardiac arrest patients. Brain functional status is an important goal of cardiac resuscitation and a key factor in measuring the final recovery status of patients. 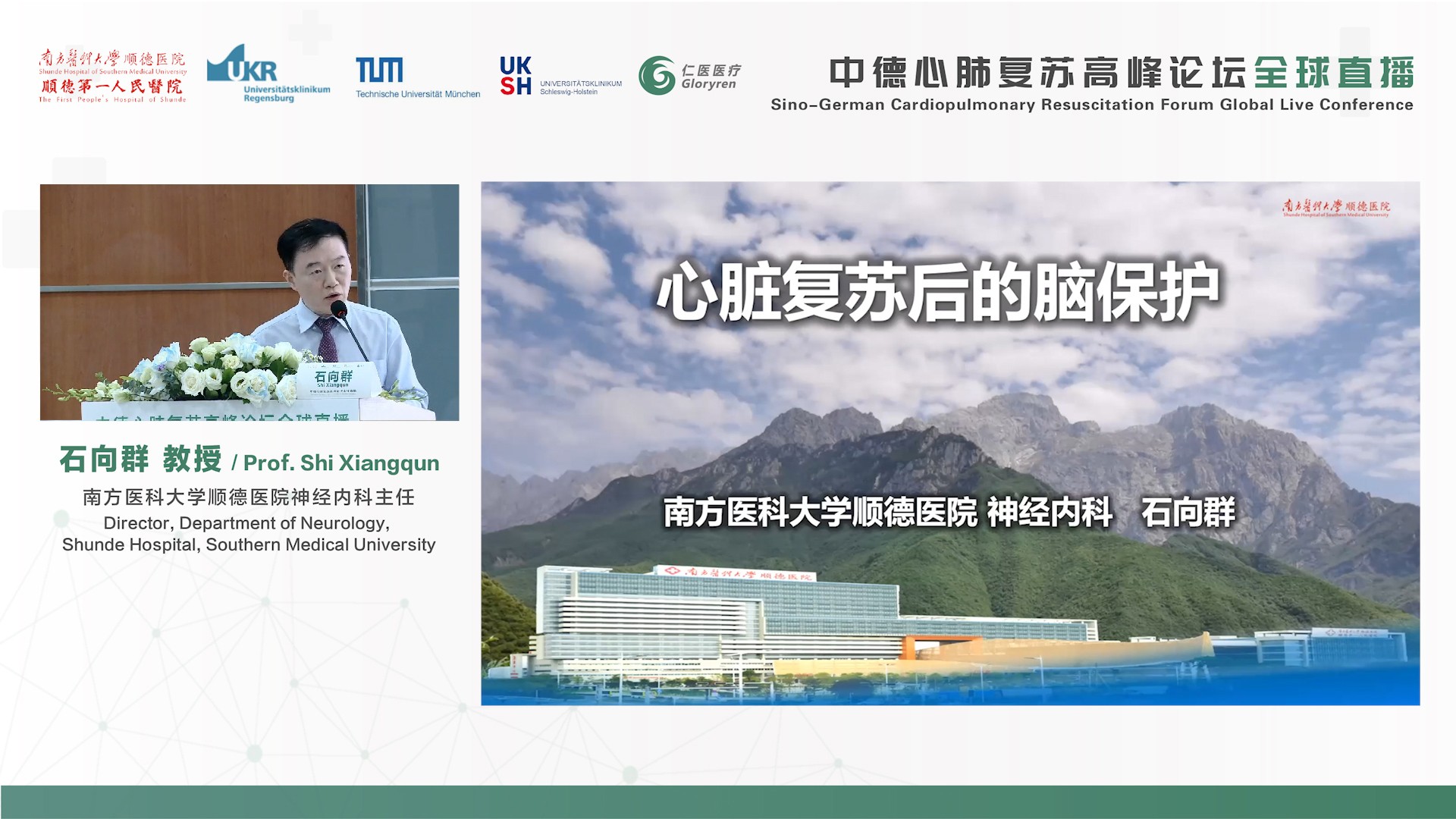 Prof. Gräsner, Direktor, Institut für Rettungs- und Notfallmedizin (IRUN) of UKSH briefly explained several international guidelines for extracorporeal cardiopulmonary resuscitation and extracted the highlights and reflections on current extracorporeal CPR. And he thinks that the Sino-German CPR Forum is a good learning platform to reevaluate and improve the entire resuscitation process, which will help to improve the survival rate of patients. 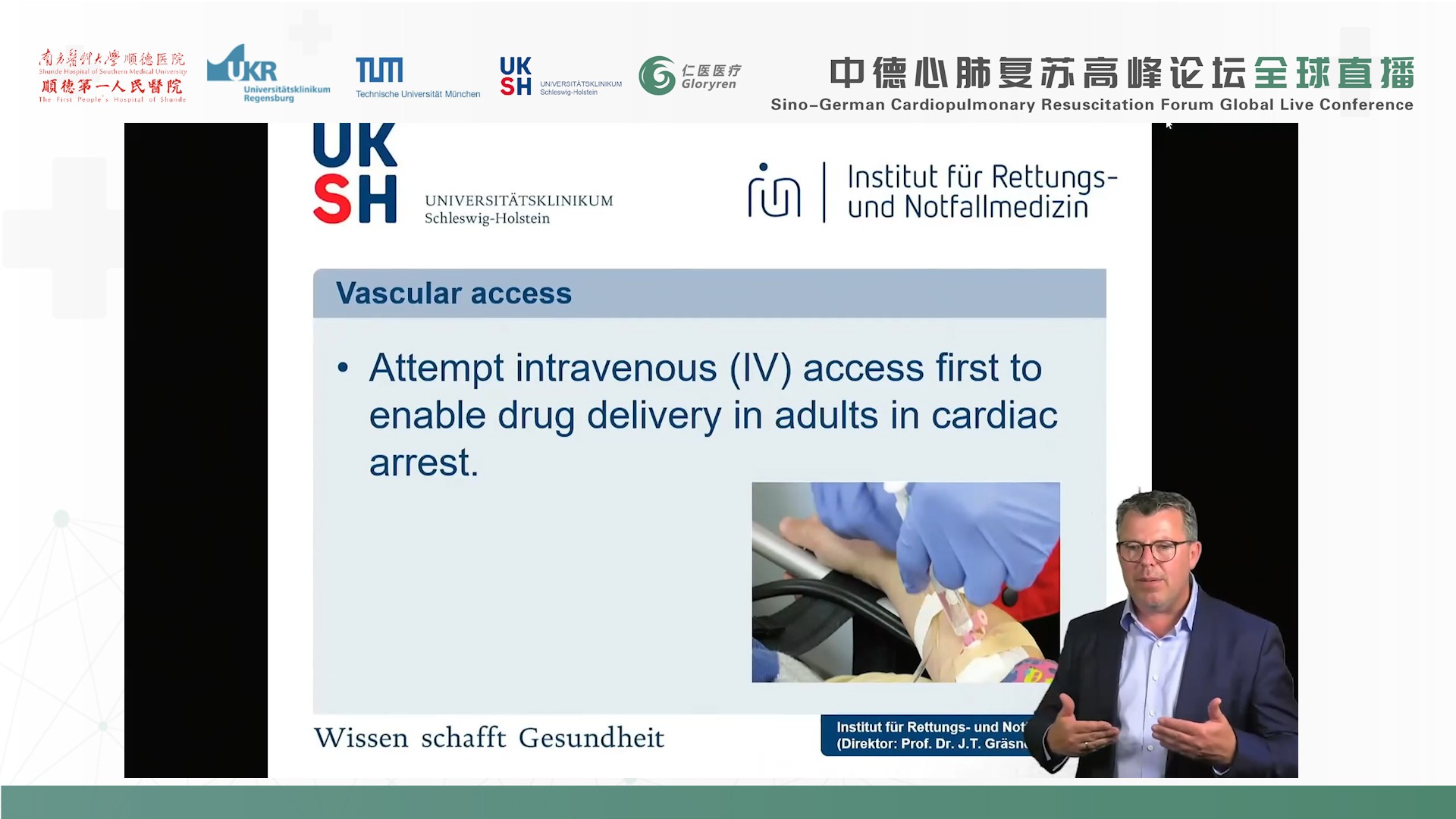 Prof. Gräsner is sharing his lecture

Through a detailed interpretation of the 2021 International Guidelines for Cardiopulmonary Resuscitation, Professor Hu Yunzhao from Shunde Hospital of Southern Medical University explained the standardized treatment after cardiopulmonary resuscitation, including diagnosis of the causes of cardiac arrest, airway and breathing management, coronary reperfusion, and hemodynamic testing. 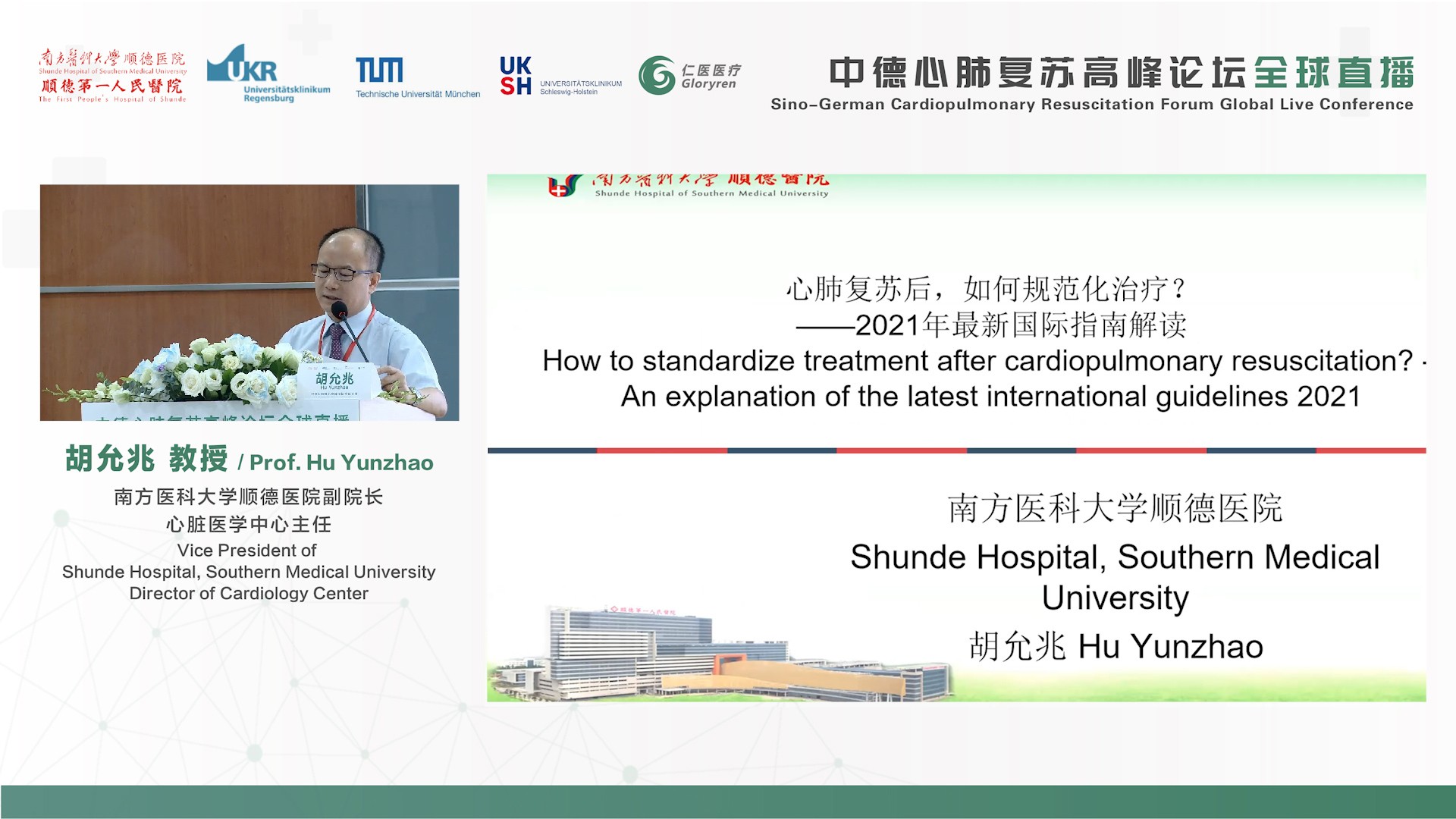 Through a combination of online streaming and offline meeting, another marked Sino-German global live academic exchange activity was carried out in Shunde District of Foshan City, attracting the participation of medical colleagues from several regions of the world, and Chinese and German experts had a insightful discussion on the progress of brain resuscitation, brain protection after cardiac arrest, highlights and reflections of international CPR guidelines and how to standardize treatment after CPR, which has profound and great significance for the promotion of extracorporeal CPR.