The Zhengzhou Metro announced the names of those who perished in the subway, every name counts: when you are in the darkest time, just remember someone once loved you so deeply

A few days ago, the Zhengzhou Metro announced the names of those who perished in the subway.

Many people weep even before they see the names.

A rainstorm has taken away 14 vivid lives.

It also leaves their families heartbroken. 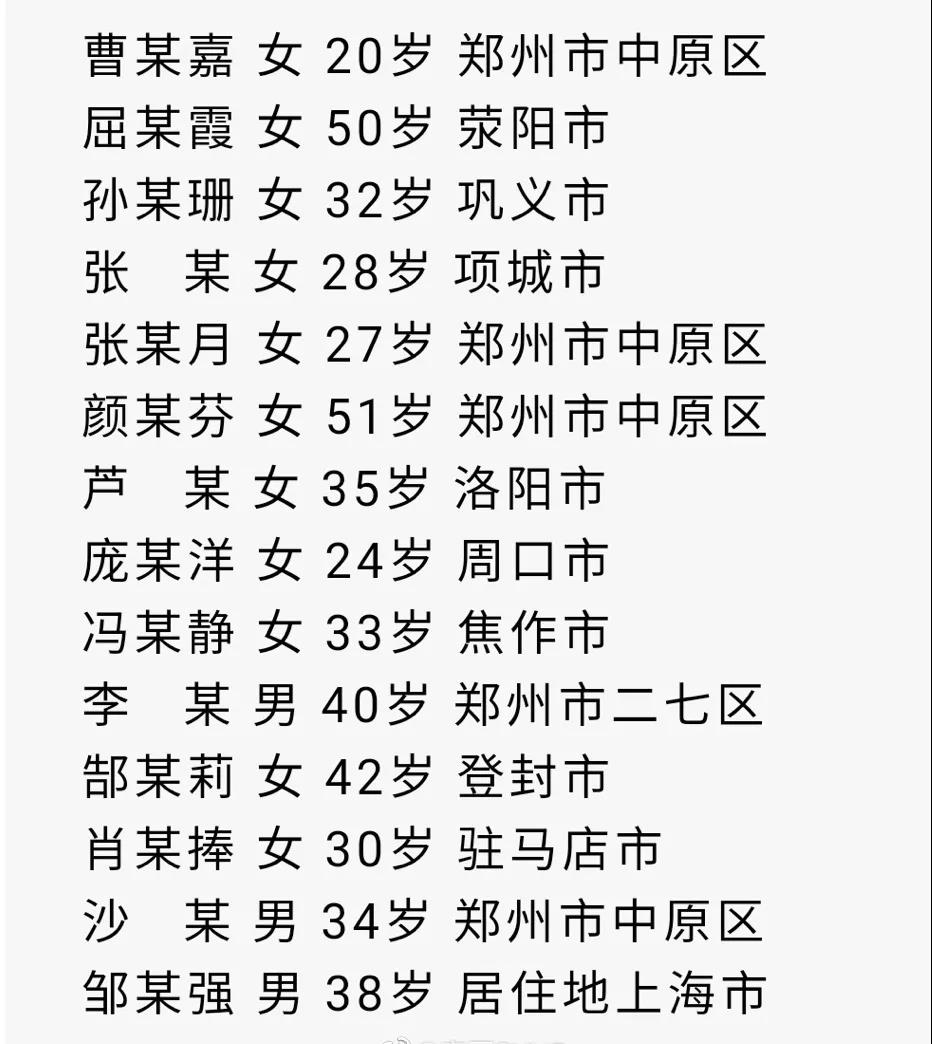 The wife who kept sending messages to her husband did not get a reply from him.

The smiling young girl with a ponytail failed to send a message to report her safety to her family.

A father, on a raincoat, standing beside a bicycle, waited at the entrance of the railway station for a long time.

The sign beside him wrote: "Niu Niu (nickname: baby girl), Daddy wants to pick you up and take you home. 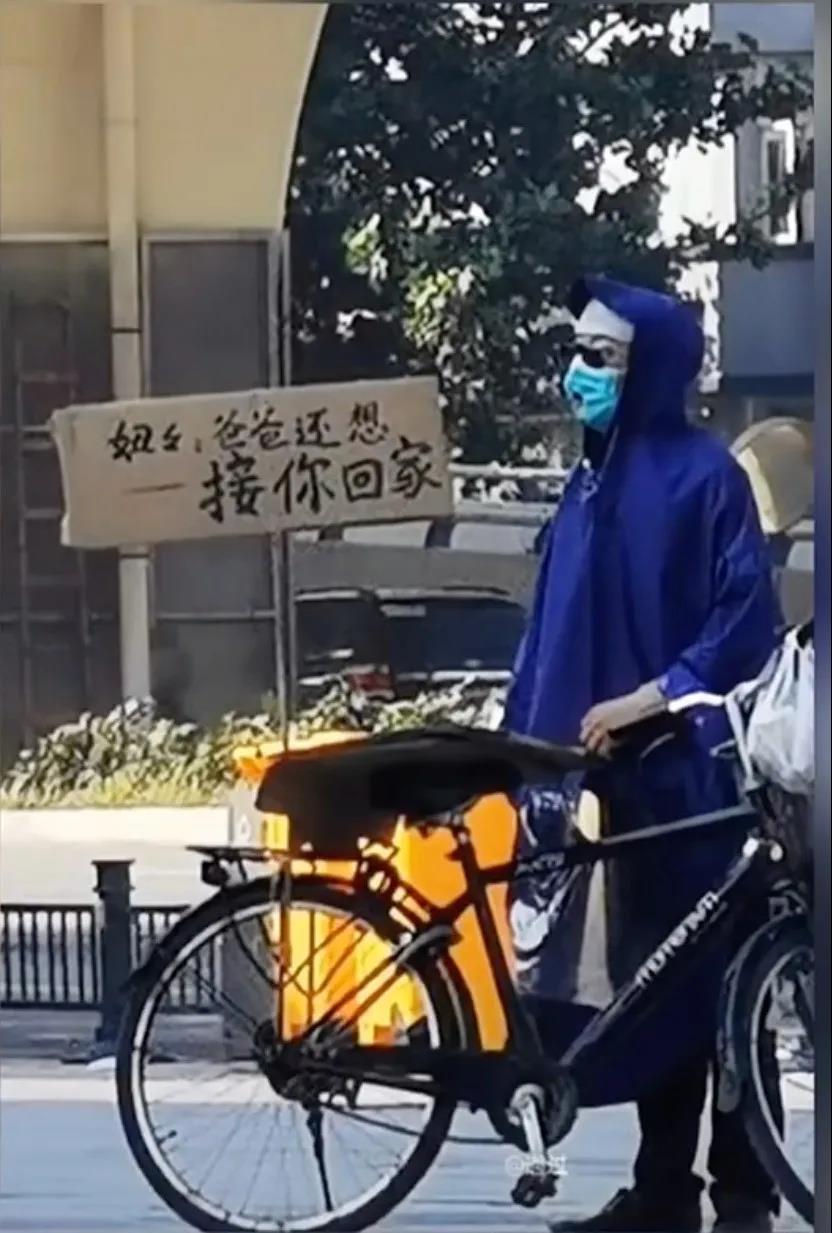 He said that he was wearing this outfit the day he said good bye to his daughter.

Now, the clothes are still there, but his daughter could never come back.

Who would have thought that the good bye is forever.

This time on their way home, they never make it.

Now, the typhoon is raging and the pandemic is coming again.

Everyone’s heart is wrenching, and we all are hoping for health and peace.

The disasters breed love and warmth.

Today, I would like to share some warm moments that have occurred over the past few days, in the hope of giving you some strength during tough times.

Please remember: the disasters are terrible indeed, but do not doubt that love and warmth will always be there and spread across our land.

At first, what we heard from Henan Province was people’s crying.

In the flooded streets, strangers held hands together and wade the water to help each others.

This is a not-so-tall fireman who jumped into the current as the floodwaters overwhelmed the stairs. He was carrying the plank on his shoulder so that the trapped people could step down to a safe place.

Some people cried out as soon as they came down. The fireman who lifted them is named Yu Ou Kai, an 18-year-old boy.

At that moment, it was his thin body that gave the trapped people the most reliable strength.

Another boy, named Xue Yuan, was the first to join the local volunteer rescue team when his hometown was struck by the floods.

At the rescue scene, he received an acceptance letter.

Those who were at the same rescue team applauded for him, and some even couldn't help but cry out.

Coincidentally, there was also a student from Tsinghua University in the volunteer team, Tong Peng.

Who would have thought that the two young men would stood up in the first place for their beloved hometown, and coincidentally be a volunteer at the same team.

In those days, there were so many people in need of help in every street of Henan.

Luckily, there were even more people who were willing to offer help.

In the rescue team, there was a "one-legged" guy who stood out.

He came from Puyang city, and after hearing the news of the emergency in Xinxiang city, he travelled more than a hundred kilometers to Xinxiang to offer his help. He had been making a dozen trips back and forth in the water with his crutches to rescue the trapped people.

Once he was so tired that his legs even cramped up.

But after a short rest, he went back to the rescue immediately.

The more rescuers, the more people would get saved.

His figure is awe-inspiring and his sense of responsibility is touching.

It is said that kindness has nothing to do with appearance, may he be treated tenderly by life.

The floods were flowing so fast that a manhole cover in the city was opened for water drainage. One owner of the nearby store was afraid that pedestrians might accidentally fall into it, so he had been standing in front of his store to remind the passersby -

“Be careful! The manhole cover, which is 50 meters afar from my store and with a bicycle beside, is open.”

Every passer-by who walked through the water in front of the shop owner would gratefully say thank you to him.

Meanwhile, passers-by who walked near the manhole cover would keep to remind those who followed behind -

“Stay behind me, the cover is open on this side, be careful.”

A man, holding an umbrella in the rain, even kept standing beside the manhole to remind passers-by to be careful.

People keep spreading love and warmth in this way during the hardest time.

These Chinese people, they are a man but stronger than the god.

Food and bottled water are hanging on the street railings.

These supplies are voluntarily prepared by people for the rescued.

When there is a shortage, people would come to refill the supplies.

Anyone passing by could take it whenever they need it.

With these supplies, they could at least have one full meal. 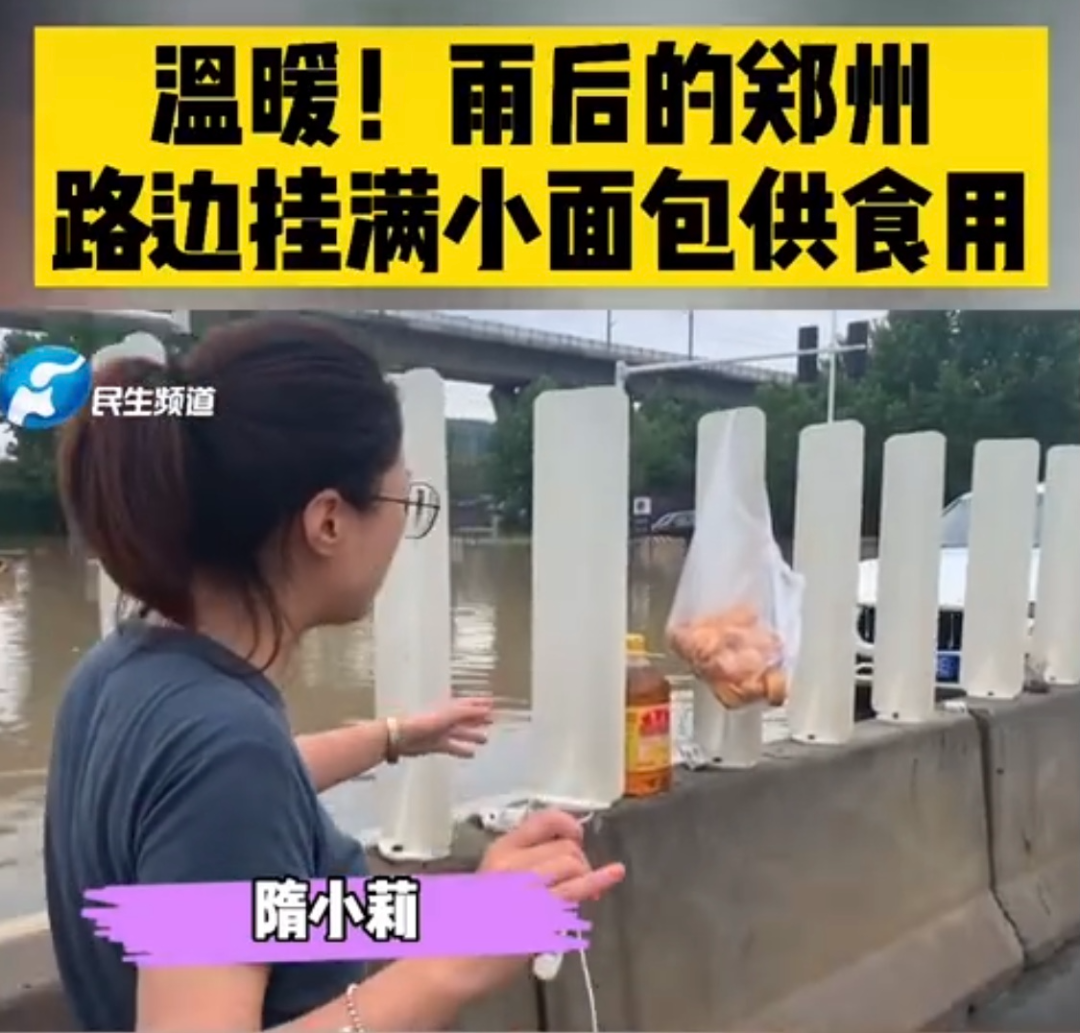 Life has its cruel side, but don't forget that it is warm in nature.

Everyone shines at somewhere that we are not aware of.

The light they shine may be faint, but it always lights up somewhere dark.

These days, countless foreign rescue vehicles appeared on the streets of Henan Province.

With nowhere to sleep, the rescuers set up tents and sleep on the ground.

One rescue team member woke up, and found a small blackboard next to their camp with a sentence written on it -

"They are resting, please detour." 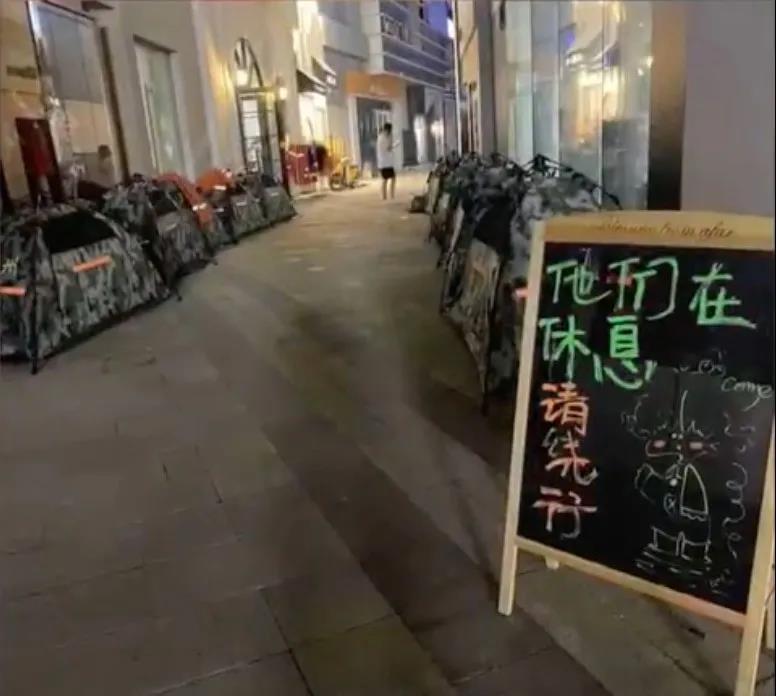 Their hard work was seen by those who were rescued.

Love is love's reward, which could be considered as the warmest thing in the world.

The relief mission was completed, and the rescue teams were about to withdraw.

On the roads where the teams were passing, people lined up to welcome them.

There was a group of strong people throwing boxes of instant noodles and bottled water into the rescue car.

But the rescuers in the cars kept pushing them out.

This scene was repeated over and over again, with both sides enjoying themselves.

Netizens commented, "The people are good at throwing, and the soldiers are good at escaping."

Behind this special "volleyball game" is people’s heartfelt thankfulness to the rescuers.

An old man, learning that the rescuers could not even have a hot meal, prepared some boiled eggs and Zongzi (Chinese sticky rice dumplings), then wrapped them in a bundle and sent them over to the rescue team while the food were still warm.

Seeing that the rescuers did not accept the food, the old man fell to his knees, and said with tears in his eyes, "I thank you so much! You must take it!"

"With you guys in Zhengzhou, we will never lose hope."

When he knew that the rescuers were stationed nearby, he set up a big pot, chopped up a lot of meat and vegetables for cooking, and send them to the rescuers.

"This is prepared for the people who came to rescue us.

It's also the first time I’ve ever put the most meat into my dishes." 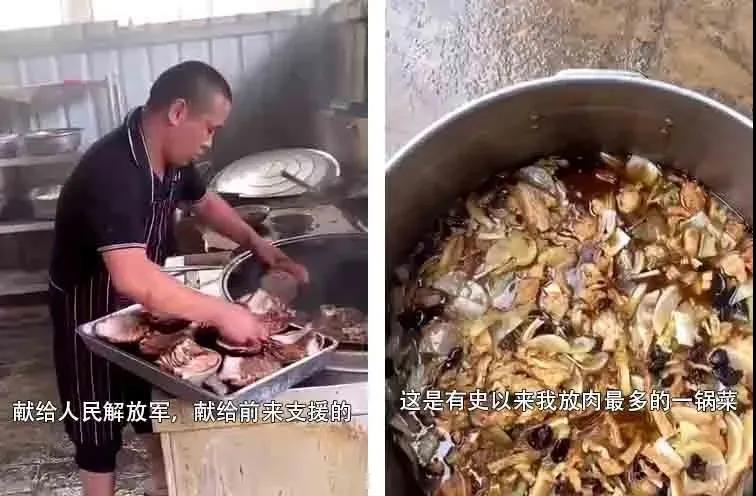 In the past few days, the Typhoon In-fa hit.

A firefighter celebrated his 27th birthday in the midst of the storm.

He has joined the team since he was 17, and this is his tenth year in the rescue team.

There was no cake or presents. During a short break, his teammates prepared a small piece of bread and sang a birthday song for him for celebration.

Outside the window, it was windy and rainy.

Inside the window, we saw a strong but soft heart of a Chinese man.

When the pandemic hit Nanjing, a group of medical staff received an order and ran to the front line to fight the pandemic.

Xia Yun was one of them. She was responsible for doing the nucleic acid tests for the people of Nanjing.

It was not an easy job, as they were wearing thick protective clothing under the hot sun, and their own clothes were soaked already.

As time is tight and tasks are heavy, she has not been home for more than a week, and can only talk to her newlywed husband via video call.

They have just been newly married for six months. Her husband was trapped in Henan because of the heavy rain.

Then he decided to join the local volunteer team to flood control.

The couple, one is in the south and the other is in the north, are contributing their efforts.

Xia Yun said, "Our country needs us, as young people, we should make our contributions!"

When a little girl was doing a nucleic acid test, she was surprised to find that the nurse in front of her was her mother.

She cried out on the spot.

She walked up timidly to do the test.

After the test, the little girl did not want to leave and stretched out her arms, asking for a hug from her mother.

Her mother gently reassured her to leave.

How could she not miss her daughter?

But at this moment, the safety of thousands of people in Nanjing is more important than her family reunion.

In the past few days, a “relay race” occurred in Nanchang.

A donor volunteered to donate his heart, lungs, liver, two kidneys and corneas.

The donation was performed by nearly 100 doctors and nurses and took 18 surgeries to complete.

At the peak, eight surgeries were performed simultaneously.

There is always a kind of people in this world.

As always, they are determined to practice their beliefs:

To be kind, calm and poised, and to light others by consuming themselves.

The mother was killed in the house collapse that caused by the heavy rain.

To the very end of her life, she remained in the lifting position and lifted her baby to a safe place.

Even if she had to sacrifice her own life to do so.

People often say, "A child is like a fruit on a tree, waiting to ripen."

The parents are the trunks and branches that bear all the weight of the child, and will only stand by silently to provide them with nourishment, regardless of the wind and rain.

This is the simplest, yet most touching love on earth.

What touches me these days is another phrase -

“At home they are saving lives, abroad they are fighting for the glory of our country.”

At the Olympic Games in Japan, some athletes wrote the words "Fighting Henan" on their socks. 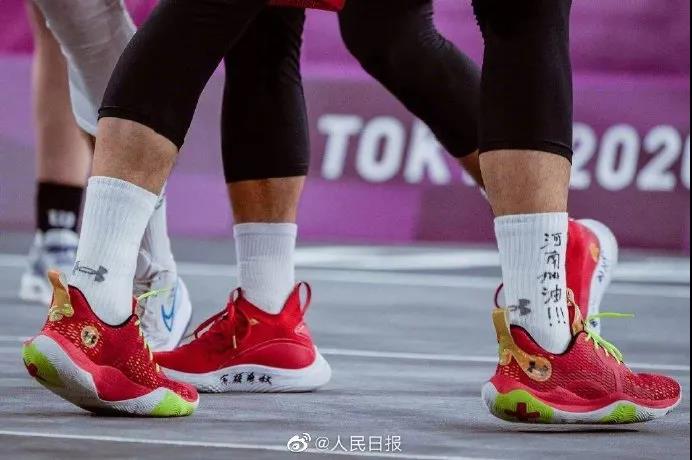 Although they can not help Henan in person, what is contained in their socks is their passion and fiery hearts to the motherland.

In this year’s Olympic Games, there are many youngsters who have never been in the limelight before, standing in front of the world for the first time.

Their parents at home couldn't help but cheer and shed tears.

It is Zhang Jiaqi's first time to participate in the Olympic Games and also to win her first Olympic gold medal in her life. 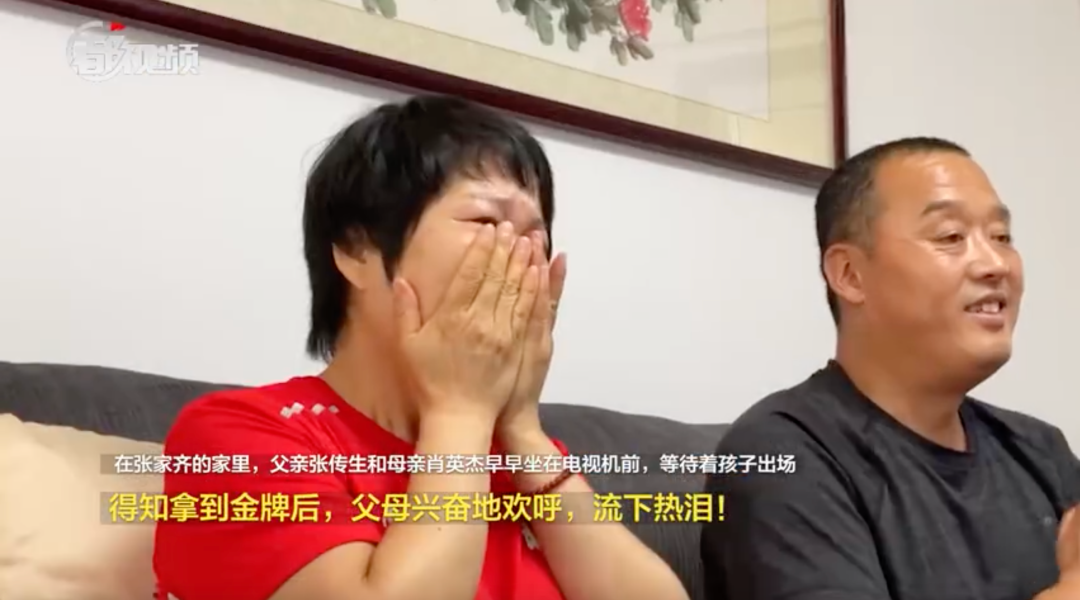 While cheering, her parents choked up and said,

"All the suffering is not in vain! It’s worth it!"

In fact, we will inevitably suffer and encounter life hurdles that we cannot overcome in our lives.

But as long as you are still alive, there are no difficulties that you cannot overcome.

There will always be a pair of invisible big hands, silently supporting you, and holding you.

I hope you can feel the warmth if you read this passage until now.

Only when you are not defeated by life will you have the courage to wake up every day and give yourself a reason to move on.

May you live the rest of your life with all the sweetness coming after your bitterness.

May the colour of your life always look warm and hopeful.

This article is forwarded from the official WeChat account_十点读书