To learn the frontier concept of spinal endoscopy and promote the MISS techniques. On June 24 to 25, the International Spinal Endoscopy Forum organized by Henan Institute of Physical Medicine and Henan No.3 Provincial People’s Hospital (hereinafter referred to as HPPH3) had its grand opening in Zhengzhou. The conference specially invited more than 50 spine experts from home and abroad, including Germany, South Korea, Mexico, Spain, Brazil, India, as well as over 400 spine specialists inside and outside Henan province to participate in the event online and offline to discuss on international cutting-edge concepts and listen to lectures presented by world-class experts. Sessions such as academic lectures, surgical demonstration and case discussion were set in the conference for colleagues to exchange insights on hot topics related to surgical techniques for cervical, thoracic and lumbar spine, such as monoportal/biportal endoscopic techniques. Prof. Cao Xiaoqiang, Chairman of the Congress and the President of HPPH3 gave a welcome speech.

In the conference, President Cao Xiaoqiang firstly extended warm welcome to the guests, then he noted that in recent years, HPPH3 has been putting people first and has put itself on the path to development by closely following the trend, creating differentiation, highlighting feature and building its brand. Committed to the discipline planning of building a completed discipline system with features, it continuously strengthens the specialty capacity and innovates treatment models. In addition, it adheres to the international development strategy as it regularly conducts professional training and academic exchanges, and it has cooperated with many hospitals at home and abroad, building up a friendly and cooperative relations, now the treatment spectrum of its Intevertebral Disc Center covers the whole spine. Lastly, he hoped that all participants could together share their insights on the clinical application and innovation of spinal endoscopy technique and could enjoy a fruitful conference. In his speech, Prof. Zhou Yue noted that HPPH3 has developed rapidly in recent years, in particular, it has contributed a lot to the exchange, innovation and promotion of spinal endoscopy technique as well as the development of minimally invasive spinal endoscopic techniques in China. He expressed his thankfulness to HPPH3 and believed that the MISS in China will become better and better with the continuous efforts of HPPH3. Prof. Gao Yanzheng said that in recent years, the surgical subject in medicine has entered into the age of precision, minimal invasion and intelligentization, under the guidance of Prof. Zhou Yue and the leadership of Prof. Zhu Huimin, the MISS in Henan Province has been at the forefront of the world. HPPH3 has been working on the development of MISS in recent years, as it conducts international and domestic training courses of spinal endoscopy technique and has founded a specialty alliance of spinal endoscopy, which contributes greatly to the MISS in Henan province. This conference gathered many experts from home and abroad, providing a good learning platform for colleagues, Prof. Gao Yanzheng added that every colleague should cherish this opportunity to learn more advanced ideas from these experts. 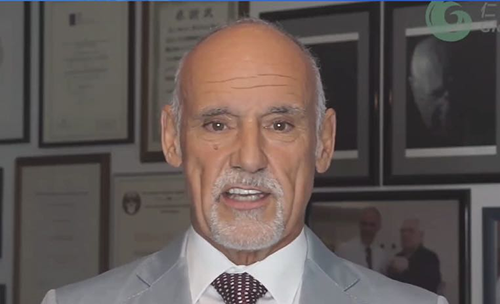 Prof. Heinz-Michael Mayer mentioned that in the hope of building a healthy China, promoting innovations in medical care, and providing the best medical services for patients, the Henan No.3 Provincial People’s Hospital has been actively working for many years to strengthen academic exchanges with experts at home and abroad, and has held many study courses and symposiums about spine with high academic standards. It provides a platform for spine surgeons around the world to exchange ideas, network with each other, and learn about the latest advancements in spine surgery. He added that this academic congress will help to promote the endoscopic spine surgery, a minimally invasive surgical technique, to more spine surgeons around the world, and hoped this great event will also build a bridge for the development of the Orthopedics in Henan Province, and of the medical and health services between China and Germany, and will profoundly contribute to Sino-German friendship. Dr. Daniel J. Rosenthal said that he was very happy to have in-depth exchanges with Chinese colleagues, then he noted that although the Covid-19 pandemic has imposed many challenges and difficulties on us, but academic exchanges will never stop. He was very happy to meet again with the Chinese colleagues, and to have this opportunity to discuss the development of minimally invasive spinal endoscopic techniques and share clinical experiences with Chinese and international specialists via the online conference. He also extended his warm greetings and congratulations to all the colleagues who have long cared for and supported the development of orthopedics, and have worked diligently for the advancement of minimally invasive spine surgery techniques. Dr. Sang Kyu Son said that with the rapid development of society and people's growing concern in personal health and the high quality of life, patients and medical staff are paying more and more attention to improve the treatment level of orthopedic diseases, especially the diseases related to the spine. Hence, the development of MISS requires the common efforts of all colleagues in the world. He also expressed sincere thankfulness to the invitation of HPPH3 and encouraged colleagues to work for the development of minimally invasive spinal endoscopic techniques. Prof. Zhu Huimin said that over the past 20 years, with the help of Prof. Zhou Yue, with the strong support of Director Wang Yiseng and Gao Yanzheng, with the joint efforts of colleagues in Henan province, the MISS in Henan province has developed rapidly and made fruitful achievements, and many Henan talents perform well in domestic and foreign academic exchange, which puts the MISS of Henan province in a prestigious position in China. Under the guidance of President Cao Xiaoqiang and the leadership of Director Zhou Honggang, the Intervertebral Disc Center of HPPH3 makes spinal endoscopy technique as its breakthrough and achieves great results in the invention, application and promotion of spinal endoscopy technique as well as the invention and transformation of new medical devices. Prof. Zhu Huimin believed that with the strong support of Prof. Zhou Yue and Director Gao Yanzheng and the joint efforts of every colleague, the MISS in Henan province will be taken to the next level. Director Dong Wei said that the medical and health services in Henan province has developed rapidly in recent years with national-level regional medical center settling in Henan province and national-level laboratories landing in many hospitals. These achievements show that the medical and health services in Henan province is in a sound development, and it will continue to realize the goal of being a medical powerhouse. HPPH3 enjoys a great reputation in the field of MISS in China, and Director Dong Wei hoped that it would help the public heath of Henan province become stronger. Then he hoped that the Orthopedics in Henan Province will develop faster under the leadership of Director Gao Yanzheng, and participants could learn some advanced ideas from this academic webinar and put them into practice to further develop Orthopedics and improve the MISS technique.

The opening ceremony is followed by the academic lecture session. During the 2-day conference, over 40 experts from home and abroad delivered lectures around the topic of “frontier concepts and clinical application of spinal endoscopy techniques”, and Prof. Meng Qingbin served as the interpreter for the lectures of foreign experts. 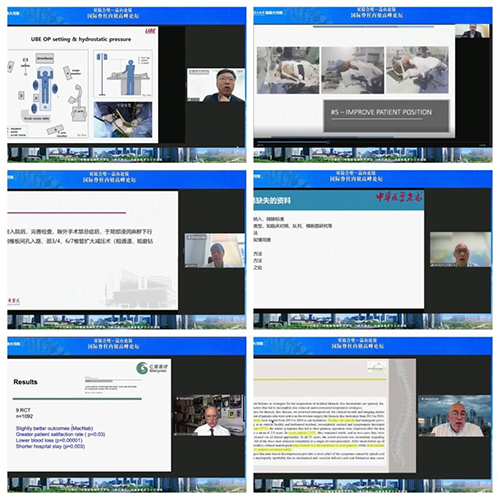 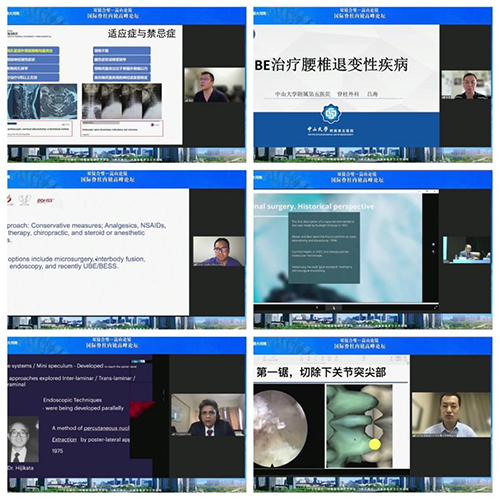 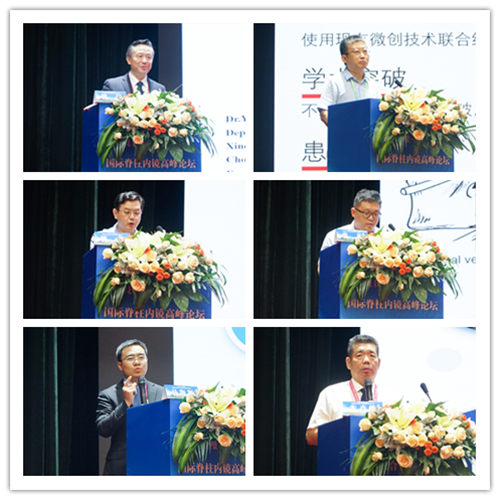 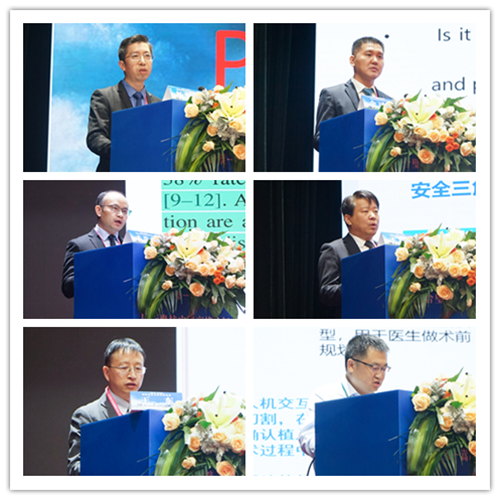 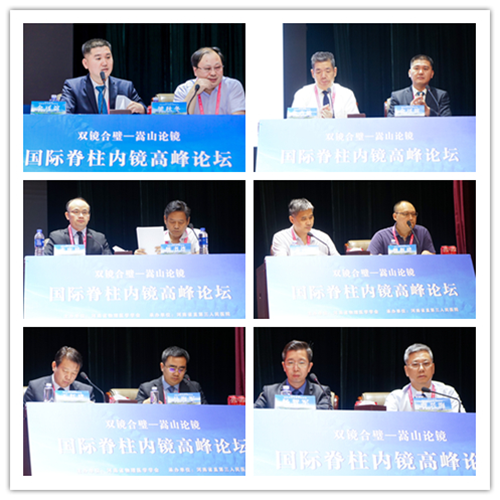 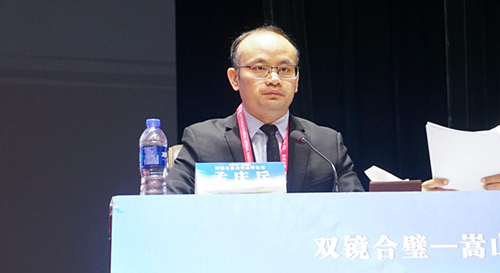 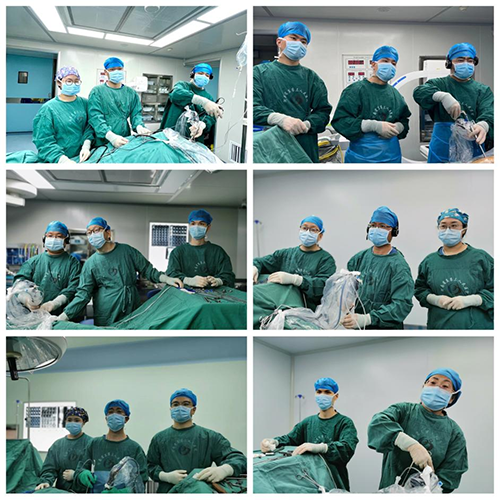 In the closing ceremony, Prof. Zhou Honggang, Director of the Intervertebral Disc Center, HPPH3 made a conclusion of this 2-day international conference. With the strong support of every colleague, this grand event was honorably joined by many top experts in the field of MISS from home and abroad, which enables participants to enhance communication, broaden horizons and gain friendship. Meanwhile, he hoped that every colleague should always stay true to the original aspiration and forge ahead to promote, innovate and develop the MISS in China.

It is estimated that the 2-day conference has attracted over 300,000 viewers from home and abroad. In addition, it provides a good learning opportunity for colleagues, and participants were enthusiastic about it and had fruitful gains. It is believed that the event will better help our Orthopaedic colleagues to broaden the horizon, update MISS concepts, improve MISS techniques, standardize MISS treatment quality system and promote MISS technique. In that case, our colleagues could develop the MISS in Henan Province in a healthy and effective way, which will benefit all the patients with spinal diseases and contribute to the cause of human health.

Photo of some of the participants