Sun Xizhuo, Deputy to Shenzhen People's Congress: Speed up the Realization of "Better Treatment for Diseases" and Build a "Shenzhen Model" of Health China - sznew.com

Editor's note: the 5th plenary session of the 19th CPC Central Committee draws a clear picture of China's future development, and the ambitions of our future development are encouraging and inspiring. In the past forty years’ building of Shenzhen Special Economic Zone, deputies to the municipal People's Congress at all levels, reacting to what people call, have been the important witnesses and driving forces in the reform journey. Under the call of the Party Group of the Standing Committee of the Shenzhen Municipal People's Congress, the city's deputies to the People's Congress at all levels have taken active action to become role models in learning and acting, fulfilling their responsibilities, being pioneers in reform and development and building up links with the public.

sznew.com has launched a series of interviews on "deputies of the People's Congress at all levels in the journey of pilot demonstration", inviting Shenzhen People's Congress deputies at all levels and from various fields such as legislation, medical care, education, science and technology, manufacturing, transportation and logistics to talk about the implementation of their thoughts on the 5th plenary session of 19th CPC Central Committee learning experience. They gather to put forward suggestions and strategies on Shenzhen scientific division and implementation, 14th Five-Year Plan formulation as well as the Long-Range Objectives Through the Year 2035. They gather wisdom and strength for the reform and development of Shenzhen in the new era and the accelerated construction of a pilot demonstration area of socialism with Chinese characteristics.

Some people say that Shenzhen may be the youngest city in China. Data from 2018 shows that the average age of people in Shenzhen is only 32 years old. But Shenzhen is not far away from its aging problems.

As a city that has both the power of formulating regulations and rules for the special economic zones and the power of municipal legislation of cities with subordinate districts, the Shenzhen Municipal People’s Congress and its Standing Committee have formulated more than 200 items of laws and regulations, which makes Shenzhen the city with the most local legislation items in our country. "The people have called for it, and the legislation should respond to it." Shenzhen has taken precautions beforehand and prepared for the pension issue with the legislation solution. 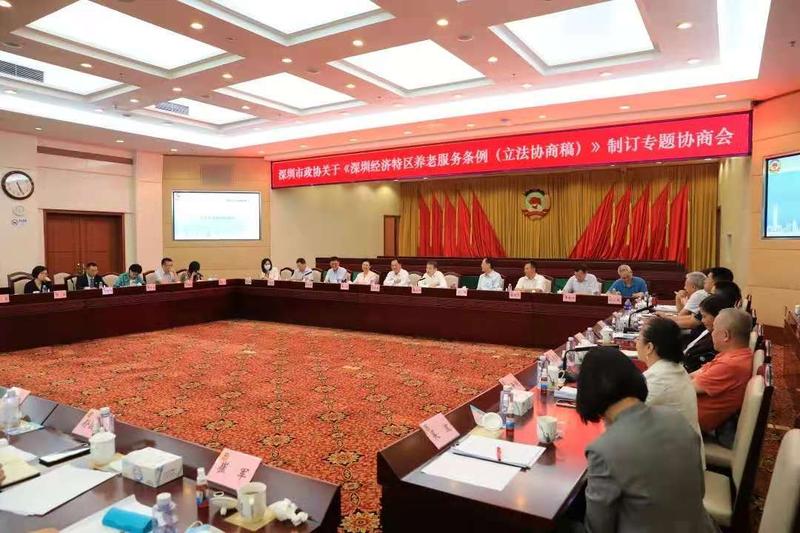 Luo Wenzhi, Director of the Standing Committee of Shenzhen Municipal People’s Congress attended a consultation meeting on the formulation of regulations on elderly care services

Shenzhen has commenced a legislative procedure of elderly care for resolving “difficulties” and “pain points” concerned by the public. On October 29, 2020, The 45th Session of The 6th  Standing Committee of the Shenzhen Municipal People's Congress approved Regulations of Elderly Care in Shenzhen Special Economic Zone (hereinafter referred to as The Regulations) which will take into effect since March 1, 2021. According to the stipulation of The Regulation, Shenzhen will start its implementation of a long-term nursing insurance mechanism since October 1, 2021.

On November 17, 2020, Luo Wenzhi, Director of the Standing Committee of Shenzhen Municipal People’s Congress convened the first session of the Standing Committee of Shenzhen Municipal People’s Congress about law enforcement inspection on Resolution of Building High-level Elderly Care and Services System (hereinafter referred to as The Resolution). Luo Wenzhi stressed that “the 14th five-year plan” is the starting period of building a modern socialist country in an all-round way, as well as a critical period for Shenzhen to establish Guangdong-Hong Kong-Macao Greater Bay Area and the first demonstration area of socialism with Chinese characteristics. Therefore, we should deeply study and implement the spirit of the Fifth Plenary Session of the 19th Central Committee, carry out important speeches and instructions made by General Secretary Xi Jinping during his presence at the 40th-anniversary ceremony of the establishment of Shenzhen Special Economic Zone and his investigation in Shenzhen. In addition, we should adhere to people-oriented development thinking, improve people’s health to a higher level, carry forward high-quality development of sanitation and health business, and speed up realization of “Better Treatment for Diseases” to create “Shenzhen Demonstration City” in this aspect in China. The Standing Committee of Shenzhen Municipal People’s Congress will spend 2 months on this inspection by means of on-the-spot investigation, survey and symposium to make contributions on behalf of Municipal People’s Congress to building up a leading and world-class demonstration city of better livelihood with “Care for the Elderly” in the country.

Under the driving force of The Resolution, the journalist is also informed that Shenzhen is accelerating its construction of livelihood project for the aged and comprehensive reconstruction and upgrading of all related services facilities across the whole city, so as to provide contracted family doctors and better health care services for over 80% of elderly aged above 65.

The Deputy of NPC Carries His Duties to Promote Medical Reform 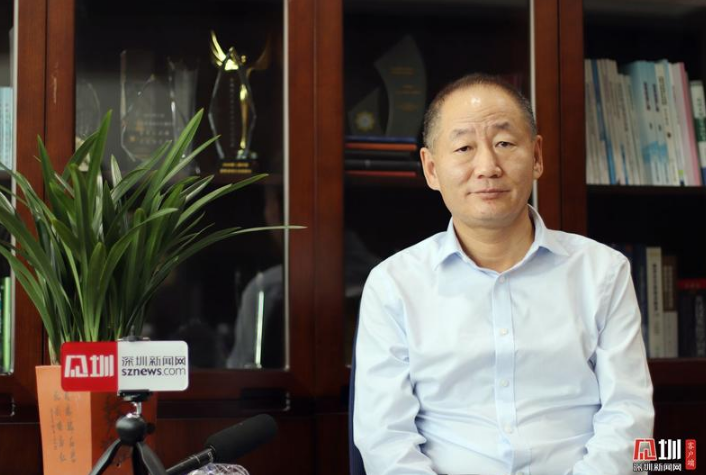 Prof. SUN XiZhuo is one of the Deputy of the National People's Congress in Shenzhen and also the President of Shenzhen Luohu Hospital Group. His work mainly focuses on promoting the practice of a new type of project in Chinese medical reform, namely, to integrate professional medical care and life care service for the elderly. In the past 5 years, Shenzhen Luohu Hospital Group, led by Prof. Sun, has gradually established a new set of medical service system. The system has been designed to shift from "Disease-centered" to "People’s health-centered”, and became a favorable example for many other megacities as Shenzhen to solve the aging problem with many experiences and references.

What will happen if the best hospital in China is reestablished in Shenzhen? Prof. Sun pointed out that the key to building up a sound medical system in Shenzhen is not relied on the construction of large hospitals, but of primary health care institutions and on the enhancement of public health. He said, "The healthcare of Shenzhen people will be guaranteed only when our community health service centers are well operated with the help of more and more talents, funds, and good policies that are drawn by the government.”

With the practice of integrating the prevention and treatment of diseases, a full-lifecycle service can be achieved... Prof. Sun hoped that with the endless hard work of medical workers, more medical workers will be nourished to serve Shenzhen. He said, "especially for our children, we hope they will be less likely to get diseases, like high blood pressure or diabetes in the future, which is also the purpose of our medical reform."

Offer Advice to the 14th Five-Year Plan of China

Shenzhen launched a pilot project of medical reform with the goal of “fewer illnesses, less hospitalization, less economic burdens and better treatment” in 2014, which happens to be in harmony with the Health China Initiative brought up by the national government. Afterward, Luohu District implemented medical and nursing integration in Huangbeiling and Cuiling nursing institutions, which was fully affirmed by the leaders of the National Health Commission. The forms include home care, daycare, short-term stay nursing and long-term nursing based at Community Healthcare Centers. Prof. Sun Xizhuo believes that this will be the mainstream nursing mode in the future, which enables the elderly to enjoy their old age in their living urban village without leaving the familiar community or familiar linguistic area.

The best-known medical journal The Lancet published a review article Quality of primary health care in China: challenges and recommendations, in which the Luohu Model by Luohu Hospital Group has been introduced and recommended in detail and was considered one of the positive pilot experiences of establishing medical alliance and integrated systems.

“I got no worries in getting a bed for the patients in Shenzhen, with the Project of High-level Hospital Construction ongoing.”

“In the coming five years, Shenzhen has to achieve a goal put forward in the document Pilot Reforms in Shenzhen on Building Socialist Demonstration Area, which is to innovate the healthcare service system. Acting as an exploration, this is not only for Shenzhen but also for the Health China Initiative.”

“What Health China Initiative can bring to ordinary citizens is that the preventable diseases could be prevented and lower the incidence. As for the diseases that need intervention by medical professionals, they should be controlled and managed well by the joint effort by primary hospital groups and municipal hospitals.”

It is a blessing that the elderly can enjoy their old age at their own community.

Prof. Sun Xizhuo: Shenzhen is an overcrowded city with limited land resources, but we have learned from the Huangbeiling Mode: With around 100 beds for each village, the elderly can enjoy their old age in their own community without building large-scale nursing institutions. In this way the elderly need not leave home and they could still speak in their own dialect such as Cantonese and Hakka. I feel very content just imagine the picture.